The French Porte-Voix Company (The Bullhorn Company) creates musical theater performances that are part of a multidisciplinary research mixing voice, rhythm, movement, images… It has developed a sensory and poetic language inspired by how early children behave and interact, and driven by a both philosophical and aesthetic matter: humanity’s relationship to nature. Its work questions the world of sensitivity and symbols and create a visual theater able to open the doors to children’s imagination.
The theatrical forms created by the company involve musical composing, body work, stage design research… Voices and instruments, such as contemporary or traditional percussion, meet textile materials, carrying stories and imagination through “musical moving bodies”. They pay specific attention to sounds and lights to capture the subtlety of their nuances and, therefore, create sensory performances where colors and tones resonate.
The company specifically addresses early childhood, with some of its work created during artistic residencies in nurseries. That type of creation process fosters intimate and creative gatherings close to children, on stage, in media libraries…
In the continuity of performances in theaters and outside the walls, the company creates new forms of landscape theater and artistic walks in natural or historical places and environments. The audience, from the earliest age, is invited to take this poetic and sensory journey.
The performances of the Porte-Voix are created under the artistic direction of Florence Goguel, a French musician and stage director. Each creation involves other musicians, dancers, scenographers, costume designers, choreographers and sound and light designers. Through the years, they’ve built up a great complicity between them on both a personal and an artistic level, which allows them to go beyond poetic writing and scenographic boundaries.
Projects
Each project exists as itself and in complementary and technically autonomous forms, which help getting closer to the audience. The whole “package” of each project offers an overall consistency around a thematic basis.
ANiMA (2020) marvels at the joy and creativity of life within us all. It comes with two in situ art forms, AMiNiMA, an improvised duo, and ODELA, a solo currently being created.
TIMÉE or the Star Sowers (2017) is a poetic tale that go with two performed concerts : Les Semeurs (The Sowers), and La Ballade des Semeurs (The Sowers’ Walk).
BODY QUARTET (2015) expresses abstract art from emblematic painters from the 20th century. It consists of movements, sounds and wandering through “living land art”.
PRIMO TEMPO (2012) pays tribute to migratory people with a “sounds hunter-gatherers” trio. It goes with PRIMO TEMPO… outdoors, a nomadic wandering, and PICCOLI TEMPI, a solo for a musician, specifically created for early childhood education sites.
Previous work
The Porte-Voix Company emerged in 1998. It comes from the reunion of artists from different backgrounds (music, drama, plastic arts, litterature) around one common project : the creation of musical theater performances. The first creations were the work of Florence Goguel and Hestia Tristani, both musicians and actresses. Their roads separated in 2010 and Florence Goguel carried on with the Porte Voix.

The company has an agreement with the DRAC Ile de France, Ministry of Culture, and is supported by the department of Hauts de Seine and the City of Nanterre. It is partnered with the Théâtre DUNOIS for the purpose of the “Théâtre du Jardin Planétaire” project (Theatre of the Planetary Garden), at the Parc Floral [Paris]. It is part of the ASSITEJ, SMALL SIZE and PUZZLE Collective networks. 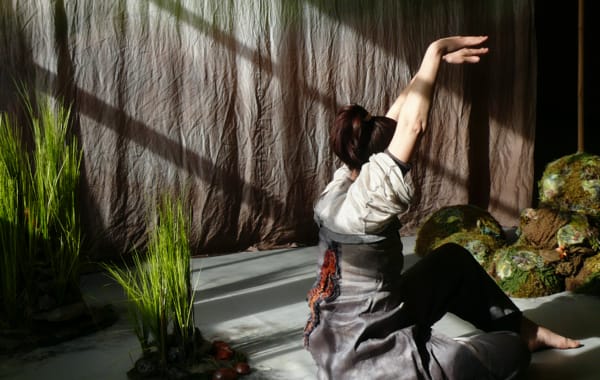 It’s a meditative daydream in a landscape slipped out from a traditional chinese painting, inspired from dreams where nature seems to represent itself. In this singular performance, the first solo of Florence Goguel, the poetic language meets music, movement and materials.

Conceived and interpreted by Florence Goguel 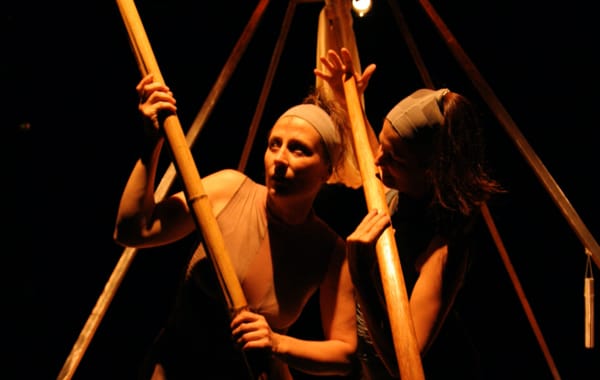 Within a quadrifrontal scenography, a steel pyramid looms in the middle of the audience. It transforms itself through the rhythms and songs of the two navigators, who express themselves in an invented language. Odd instruments, suspension of the bodies, moving architecture… Through pictures, the audience takes a unique journey.

Conceived and interpreted by Florence Goguel and HestiaTristani. 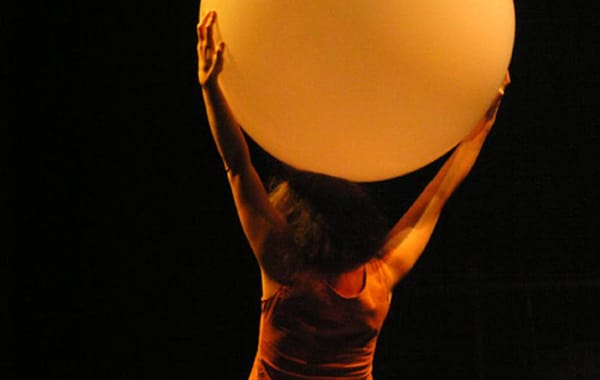 “The earth rings and resonates, listen to it !”. In a circular scenography allowing a great proximity with the public, a mandala of sounds and materials is gradually elaborated. Voices, cristal Baschet, litophone, gender and gong Javanese… The instrumental gesture meets the gesture danced in this ôde to the ancestral earth.

Conceived and performed by Florence Goguel and Hestia Tristani. 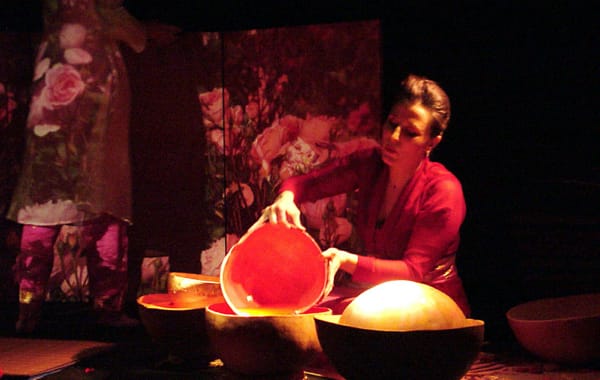 In this first play created by the Porte-Voix for early children, the color pink and the rose flowers coexist in this visual and musical poem combining cultures : bamboo xylophone and Balinese pink rice offerings, Africans drums and water games, French traditional poetry and songs… a new multidisciplinary language looms.

Conceived and interpreted by Florence Goguel and HestiaTristani.